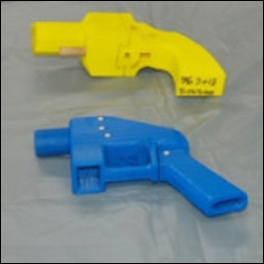 Just hours before Defense Distributed, pursuant to a Settlement Agreement with the Department of State’s Directorate of Defense Trade Controls, planned to upload plans to allow anyone who can afford a 3-D printer to make their own plastic guns, a federal district court in Seattle entered a temporary restraining order prohibitingÂ the uploading of those plans.Â  Â The temporary restraining order was entered at the request of attorneys general from eight states and the District of Columbia.Â  Â In entering the order, the court stated that the plaintiffs were likely to prevail on the merits for two reasons — both, frankly, fairly questionable.

The first reason the court thought that plaintiffs would likely prevail is that, in the court’s view, the Settlement Agreement effectively removed items fromÂ theÂ United States Munitions List (“USML”)Â without the prior thirty-day notice to Congress as required by section 38(f) of the Arms Export Control Act, 22 U.S.C. Â§ 2278(f).Â  As you probably recall, DDTC and BIS so far have only issued proposed rules.Â  Â As noted early on in the export control process, State and Commerce indicated that they would provide the section 38(f) notices to Congress 30 days prior to publishing the final rule.Â  At this point, only the proposed rules have been issuedÂ and the comment period ended on July 9, so it is likely that no section 38(f) notices have been sent to Congress as the court states. Certainly they would not have been sentÂ thirty days prior to the execution of the Settlement Agreement on June 29 as the Court saidÂ should have been done.

The other reason relied on by the district court in temporarily blocking the Settlement Agreement was the requirement in Executive Order 11958 that any removal of any item from the USML by DDTC would need the concurrence of the Department of Defense.Â  The court stated:

When the President delegated his authority under the AECA to the Secretary of State, he also imposed a requirement that any changes in designations of defense articles and defense services subject to export control had to have the concurrence of the Secretary of Defense. There is no indication that the federal government followed the prescribed procedures

Apparently, the district court had not bothered to read the initial notice from the Department of Commerce on the proposed removal of Category I firearms from the United States Munitions List to the Commerce Control List.Â  Â That notice clearly states:

Oops.Â  So even if the Settlement Agreement effectively removed certain Article I items from the USML, which it did not, the DOD had already agreed to that prior to the publication of the initial notices proposing removal of those items.

The problem here is that if states or the federal government want to regulate 3-D gun plans, the export laws areÂ not the way to do it because the policy driving these decisions has nothing to do with exports at all but rather with purely domestic considerations such as detectability and traceability.Â  The states attorneys general presumably don’t really care whether these gun plans and the plastic guns made from them wreak havoc in Croatia; they are worried about the consequences right at home in their own states.Â  Moreover, there is already a law on the books –Â Â theÂ Undetectable Firearms Act of 1988, 18 U.S.C. Â§ 922(p) — which makes it illegal to manufacture undetectable weapons.Â  So, rather than try to shoehorn these issues into the Arms Export Control Act, lawmakers and officials should confront any issues with these plans directly.