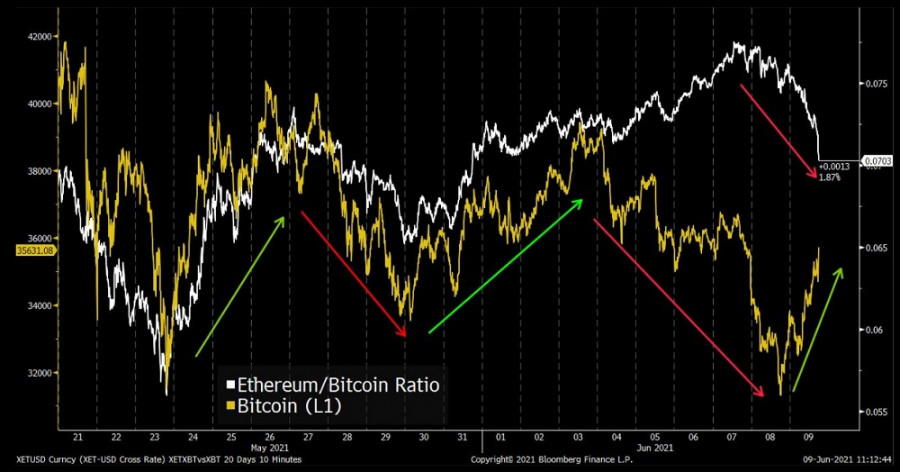 Sorry, this happened a little faster than we promised you in the last article – cryptocurrencies have finally filed for divorce.

Today is an epoch-making event: the Ethereum to Bitcoin ratio has just changed.

Most recently, we gave a graph of the ratio of cryptocurrencies and promised you that one day, due to fundamental differences, Bitcoin, Ethereum and other alt fiddles will diverge. And so it happened.

Almost all cryptocurrencies in the world until this time tended to copy the behavior of bitcoin. Even the most advanced broadcast looked like a complete copy of its older brother, only on a different level. Of course, there were some events in the life of ETH, as well as other coins, which at times changed the general trend. But in general, the cryptocurrency market was a single monolith. It looks like we are witnessing the end of this trend.

After El Salvador announced the legalization of bitcoin, the quotes of the two leading digital currencies diverged forever.

Of course, for some time we will observe the codependent fluctuations of the two blockchain flagships – while the crypto exchange is being established in El Salvador. And then the currencies will most likely be dispersed forever.

You need to understand the importance of this event: we are witnessing the creation of another segment for exchange trading – now in pairs of purely digital currencies. A couple more years – and this market will grab a huge share of speculation in fiat currencies from the market.

Also in the last article we talked about a promising new cryptocurrency Solana. Yesterday Solana Labs completed another round of fundraising for development. The total volume was $ 314.2 million.

Horowitz was among the largest contributors. Other investors, including Polychain Capital, Alameda Research and CoinShares, also participated in fundraising through Solana Coin buybacks.

Those who have not read about a new interesting currency, we recommend that you familiarize yourself with the article. Solana is positioned as a new, more technically advanced digital currency. It scales much more easily. Block requests are much faster and consume fewer resources.

According to CoinGecko, the SOL token used on the Solana blockchain has grown by over 6,300% over the past year. Bitcoin is up about 250% over the same period, while Ether is up about 940%.

In fact, we are witnessing the struggle of cryptocurrencies for a place in the investment sun. Given the most severe selection, can they be called a new form of life? (the author jokes awkwardly – ed.)

It is doubly interesting to see that Bitcoin maintains its leading position despite the squabble among other altcoins.

We have already repeatedly analyzed its features, thanks to which it continues to occupy a special place in the market. Despite the obvious shortcomings, such as crazy volatility and a large carbon footprint in its production, BTC remains the first and is not going to give up its positions.

However, as a flagship, it also takes on most of the hits.

More than 1,100 people have just been arrested in the course of the Chinese government’s anti-money laundering operations through digital. 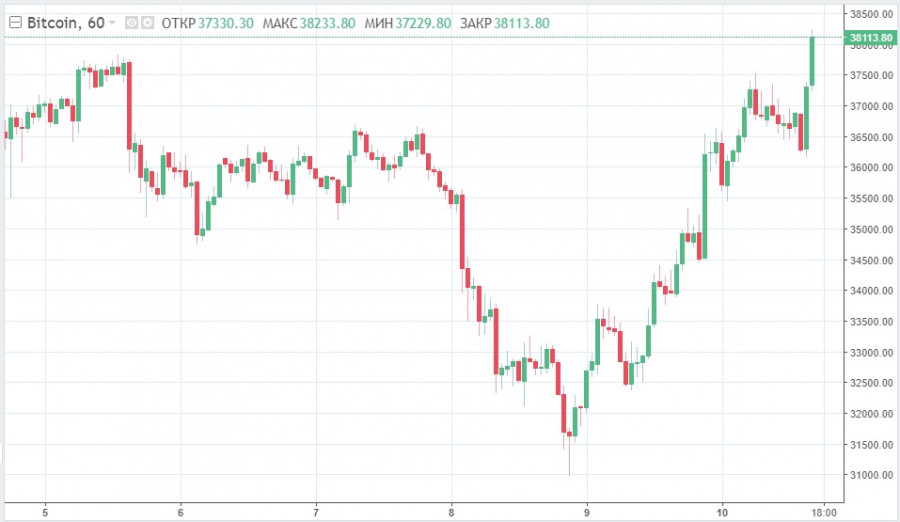 According to the PRC Ministry of Public Security, police have arrested more than 170 criminal groups in 23 provinces and cities that use crypto to launder money in telecommunications fraud. Most of those arrested are dummies who registered bank accounts for the withdrawal of the yuan and its subsequent conversion into coins. The high commission of 1.5% to 5% has attracted many ordinary citizens to participate in the scheme, government officials say.

China has not yet outlawed cryptocurrencies, but they are under tacit repression due to the active development of the digital yuan. For example, when trading in numbers, participants in the transaction are harassed by the public safety department, according to an insider Bloomberg.

But the PRC government is not going to stop: a data security law was passed today, strengthening Beijing’s control over digital information amid crackdowns on local tech giants and market access disputes with the United States.

According to the state broadcaster of the PRC Central Television, the said law was approved on Thursday by the Standing Committee of the National People’s Congress. Its full text was not published immediately, which indicates the haste of the decision.

An earlier project called for the creation of a categorical and hierarchical system for data and risk assessment methods. The project broadcasts a call for a national security review of data processing, arguing that harmful activities abroad should be “prosecuted by law.”

According to Caroline Bigg, who specializes in intellectual property and technology at DLA Piper in Hong Kong, companies are still unclear exactly how the law will be implemented: “This remains a complex – and increasingly burdensome – compliance framework for multinational companies.”

Of course, the new regulatory act is aimed not only at strengthening control in the field of blockchain technologies. This is primarily a persistent attempt to wrest control of vast amounts of information from giants such as Alibaba Group Holding Ltd. and Tencent Holdings Ltd., as part of a broader effort to position China as a data center leader. Beijing is investing huge amounts of money in data centers and digital infrastructure in general to make this area the engine of the national economy and strengthen the legitimacy of the Communist Party within the country.

Anything that will annoy Chinese regulators will be tightly regulated, from promising NFTs to DeFi.

China’s digital economy grew much faster than its gross domestic product in 2019, according to the China Academy of Information and Communication Technology. By 2025, the country will store about one-third of the world’s data, about 60% more than the United States, according to research firm IDC.

And while the West, focused on the idea of ​​observing rights and freedoms, is trying to come to a consensus on how much private data it is permissible to transfer to government agencies, China is already actively subjugating the world under its paradigm of total control. And this is done simply through cheap data center services located in the Chinese provinces.

As such, experts naturally expect data security regulations to provide a broad framework for future rules on Internet services, shielding, unlocking and simplifying the tracking of valuable data in the interests of national security (which can be understood as anything). There will also likely be published guidelines on how certain types of data should be stored and processed locally, as well as requirements for companies to track and report the information they hold.

The NPC is also drafting a privacy law that is expected to be passed later this year.

This process reflects not only the internal struggle of the authorities with digital currencies, but also a larger international confrontation between the United States and China, which has become very aggravated this year and will have far-reaching consequences.

Most likely, this will hit the growth of bitcoin today.

As for the future, when choosing cloud services, especially in the field of cryptocurrency mining, pay attention to their physical location – it is quite possible that your name is already on the list of digital asset traders. And this list is on the table of the head of the regional department of public safety.

With this in mind, we can predict that next year we will see a completely logical outflow of investments from the Chinese sector to countries with more favorable legislation in the field of data storage … and cheap electricity. We recommend that you closely monitor the energy market and data on its consumption by country – this will point you to new areas of concentration of mining farms and data centers before it becomes mainstream.


Go to Source of this post
Author Of this post: administrator
Title Of post: Ethereum / Bitcoin went their separate ways. Arrest of 1,100 people for crypto trading
Author Link: {authorlink}

One-third of All POS Transactions via Mobile Wallet by 2024

Is Freelancing For You? The pros and cons

Building a Community For Your Online Business